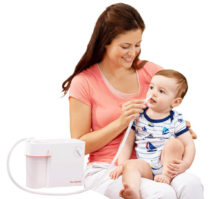 BabySmie S-502 is a hospital-grade electric nasal aspirator that is excellent at helping children to suck out excessive mucus during a runny nose.

As you may or may not know, babies cannot conduct spontaneous nose breathing by themselves up until the age of two, and they can only keep breathing out of their mouth.

This means that they cannot even push out any nasal mucus that might accumulate in their nose. This accumulated nasal mucus stays in the nasal cavity and causes inflammation that eventually leads babies to middle ear infection.

This is one of the reason why you need a hospital grade electric nasal aspirator to completely clean out the nasal mucus before it develops into an ear infection or something more serious.

Huge Benefits but Under Utilized

The electric nasal aspiration has such huge benefits, but many people are not aware about it. Moms are not aware of the relationship between mucus and middle ear infection until doctors directly tell them when it’s already too late.

It's shocking to know, but it’s true: 50% of the total antibiotic prescriptions still recommended to preschoolers were for the treatment of ear related infections, but antibiotics are not helpful for ear infection caused by mucus because they treat illnesses caused by bacteria, not viruses.

Founded by Kiyotaka Yamafuji, BabySmile was designed and made in the Japan. The BabySmile S-502 is an excellent nasal aspirator designed to counter all the problem as mentioned earlier.

The BabySmile is the popular brand for parent around Japan and praised for its quality product. Also, this nasal aspirator has received many great reviews and appreciation from many moms too. And now, BabySmile is catching up in popularity in with the US parents as well.

​The BabySmile electric nasal aspiration is a handy baby product that every parent should have one. The BabySmile was also hugely used by the children who suffer from nose disabilities. Here is a short product demo clip on BabySmile S-502.

More and more ENT doctors and pediatricians in the United States and Japan use this dedicated nasal aspirator to suction mucus when children are suffering from a cold.

​Although the pediatricians still prescribe medications for a runny nose, but many agrees that suctioning mucus thoroughly is very helpful and effectively get children heal faster.

​Doctors and pediatricians encourage parents to use nasal aspirator at home, helping overwhelmed mothers look after their children, and improving babies' quality of life that will eventually be the great support for mothers in the child-raising years.

​Success of BabySmile In Japan

The S-502 has become the best-selling product and electric nasal aspirator standard in Japan. It's also the company mission to deliver this fantastic nasal care product to mothers across the United States. Here is an excerpt from the company:

In some cases, mothers blame themselves. This is the part where we understand and agree based on our experience. The aspirator that we invented and provide is not just the aspirator which can suction well. It will support the baby's health and create the happy time for children, mothers, and families.

We firmly believe that by using the BabySmile, you will see the connection between nasal care and so many common baby illnesses, and hopefully result in a happier and healthier baby!"

The Best Nasal Aspirator for Baby in Japan and US

BabySmile S-502 is a medical device approved by Japan’s Ministry of Health, Labour and Welfare. Today, the use of a power-operated nasal aspirator in the home is very popular in Japan, and BabySmile S-502 is the pioneer of this emerging technology.

​BabySmile has ranked as the #2 best-selling product in the “Nasal Aspirator” category on Amazon Japan, second only to the traditional nasal aspirator powered by manual mouth suctioning.

While BabySmile has achieved much limelight in Japan, but this product is fast catching popularity with the parents in US too.

This electric nasal aspirator also won a “Kids Design Award” in 2015 for its impressive sales record and social impact. And the company behind BabySmile - Baby Health Care is a JPMA member.

​Since BabySmile is power-operated, mucus can be suctioned thoroughly, and you can conveniently operate it at your home. The baby-friendly silicone tip, which touches the baby’s nostril, is very soft and BPA free.

​The suction power can be adjusted to three levels, and the parts can be washed easily with water after use. BabySmile S-502 is mom-friendly and is a major time-saver for busy moms.